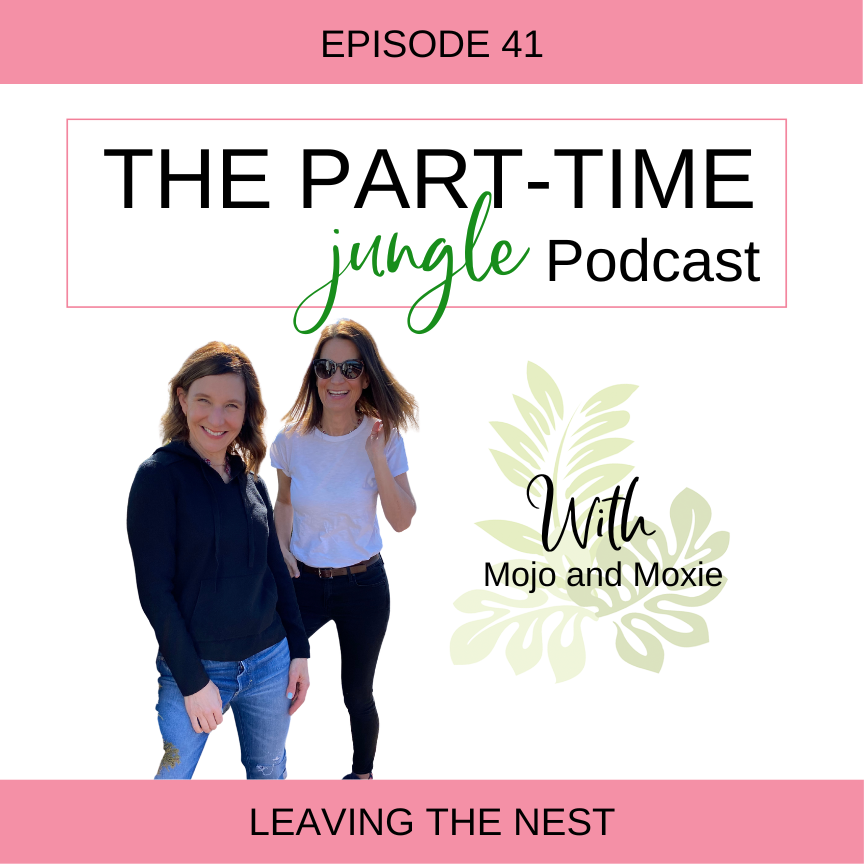 e041 – The Part-Time Jungle Podcast: Leaving the Nest with Mojo and Moxie

Danni Mcfarland and Christine Klassen are two ‘almost 50’ gals living their best lives. They met when their oldest boys became fast friends at a local park. A few dozen playdates, cases of wine, dinner dates and vacations later – the rest is history!  Over a glass or 2 of wine, they decided to create a blog, born from a desire to include the more established woman in the blogging sphere. They wanted to create a template that was relatable to a family that is starting to face the challenges of kids leaving the nest, “big kid issues,” aging, and the excitement and trepidation of this next stage. And the rest is history!
In this episode:

Connect with Mojo and Moxie:

Connect with Tiana and The Part-Time Jungle:

*Thank you to Emily Mc., my amazing professional student intern, who wrote the show notes for this episode!

KIDS LEARNING ADULTING
Both Danni and Christine have kids who are young adults, and with the pandemic, they have been back at home. They’ve also been learning how to “adult” during these times, and they each follow their own individual schedules. Danni notes that a good analogy is giving the kids their independence as they learn adulting. On the other hand, Christine talks about how she does not make breakfasts or lunches for her kids anymore, and leaves them to their own devices until dinner. One of Christine’s children is away at school, so she speaks about how there’s an adjustment period when they arrive back home. Another thing that Christine touches on is the difference in maturity between her 17 year-old, and her 21 year-old. She notes that she sees her 21 year-old as a fully grown man, but cannot picture her 17 year-old being at that maturity level as of right now.

SUPPORTING FROM AFAR
Whilst recognizing that their kids are all grown up now, Danni says that the door does not automatically close on them when they turn 21. They are still welcome to come home or go to their parents for support, which a lot of kids forget whilst trying to prove their independence. They also give the reminder that it’s okay to stray from what you thought you were originally going to do.

MOMENTS TO REFLECT ON
Christine describes her favourite part of this stage of motherhood as being able to see her children’s decisions and how their paths are being guided. She also finds comfort with knowing that she helped shape her children as people, and that she can help guide them as they get older. Danni enjoys being able to talk to her children as adults and have more meaningful conversations with them now that they’re more mature. She goes to say that, not that their conversations when they were younger weren’t meaningful, but with that new level of maturity, their conversations can go deeper. Danni reminds us that as we get older, we have a new level of understanding and appreciation for things we may have overlooked in the years before.

Christine has two quotes that she lives by, the first being “this too shall pass,” and the second, “their story is not done.” Christine’s husband said this, which changed her perspective. It relates to anything going on in the house at that moment that may be chaotic, and helps remind Christine that her kids are still young, and this issue will not be the pinnacle of their stories. They have the rest of their lives ahead of them, “this too shall pass.” 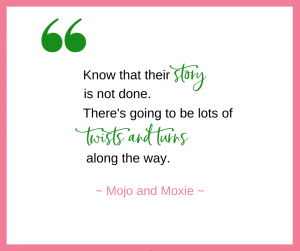 LEARNING TO SIT BY AND LET GO

Danni describes one of her biggest struggles as a mother as watching her children fail at something they are passionate about. She also says that having to sit by to let them figure it out is difficult for her, or any parent. She says that although it hurts in the moment, failure is necessary to figure out what you want to do in life. Danni copes with this by learning to let go, and being comfortable with the idea of doing so. 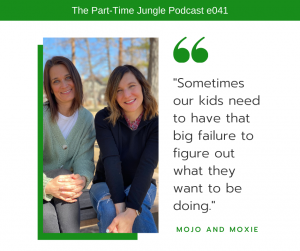 THE STORY OF MOJO AND MOXIE

Contrary to popular belief, the title “Mojo and Moxie” came about whilst the duo were thinking about names that had two parts to it. They decided that “Mojo and Moxie” was fitting, because those were also two key elements of the people that Dannie and Christine are. The tagline, on the other hand, was a result of Danni and Christine wanting people to be able to access their social media, and relate to it.

Danni speaks about social media and its impact on the people in her generation. They weren’t brought up with technology like how some of the younger generations were, so at first Danni found it hard to decide what she wanted to leave behind on social media. Eventually, she decided that having an authentic take would make her content more relatable to her target audience, rather than pretending to be perfect, she decided that it would be best to be vulnerable. She also describes the balance between writing an authentic blog and not hurting her children as a “fine balance.”

WHAT THEY WISH THEY KNEW

Some advice Danni gives is that she wished she wasn’t as hard on herself for any of her shortcomings as a mother. She was a stay at home Mom for a little over a decade, and she held herself to really high expectations of what her job should look like. She reminds us to not be so hard on ourselves if our children do not progress through the different stages as quickly as others. Christine wishes that she would have “chilled out” a little bit. This goes hand in hand with Danni’s advice, and Christine says that just because something is big in the moment, doesn’t mean that it’ll be big in the future. Looking back on memories, she can locate situations where something seemed like a huge deal, but in the present moment, it’s a memory that she and her children joke about and speak of fondly.

Mojo and Moxie is moving to North America, with Christine in the U.S. and Danni in Canada. They’re also looking forward to continuing their Speaker Series, which was a huge success. Danni speaks about the empty nest feeling and how it is important for people in the same situation to reconnect with their partners. This could just be simple activities such as going on walks together, taking up similar hobbies, etc.

Danni’s go-to meal on a busy school night is tacos, whereas Christine’s is chicken chili. Family activities can be hard to arrange, especially when your kids are older. Danni explains how when they were younger, her family would go on camping trips or go hiking as a type of family activity. Now, with COVID, and with her children getting older, her favourite family game was Yahtzee. Christine agrees with this, saying that her family plays it whenever they’re all together because it’s “quick and fun.”

Over the course of the pandemic, Christine and her husband have watched Downton Abbey, twice. So it’s safe to say that Christine and her husband enjoyed it. She also highly recommends a podcast called Ask Lisa by Lisa DeMar, she’s a psychologist and an author of two parenting books. Christine also recommends a book called The Push, she says that personally, it changed her life, and she notes that any Mom should read it. Danni’s current listen is a podcast called Hot Flashes and Cool Topics, this is targeted for the midlife women, or women who are in perimenopause or menopause. A TV show that she has recently enjoyed was The Real Housewives (in both Orange County and Beverly Hills). Danni recently finished When the Crawdads Sing, which she really enjoyed, and recommended to any listeners.

Danni says that, no matter how many parenting books she read, she noticed that none of them would have the level of individualization as her own children. By this, she means that some advice that worked for the author, may not have the same effect on her children, and that’s okay. Danni asked her children if there was anything she could have done differently as a mother, and other than a few funny anecdotes, they didn’t have anything to say. Christine talks about how she has learning opportunities every day, but in the end, she believes that the only thing that matters is that you love your children and you show them that. She says it’s hard to move forwards if you’re constantly reflecting on the past.

Danni says that, to anyone who finds themself struggling, it does and will get better as the kids get older. Don’t dwell on your mistakes, this too shall pass. Christine notes that you have to let your children fail. If you start while they’re younger, they become more responsible at a younger age. This lets them decide how much time they dedicate to school, hobbies, etc. By not micromanaging their lives, you allow them to have freedom, but also the ability to go to you for help.

Danni and Christine’s Speaker Series focuses on a variety of topics including menopause and parenting. They get experts in to give the facts and hold conversations about the different aspects of late motherhood. They also talk about empty nest syndrome and how to cope with that. These videos are available on both their Facebook and their blog page.

Thanks so much to Danni and Christine for this awesome conversation and thank YOU for tuning in! ~Tiana